Standing over 320ft tall across 13 floors, the Grade I listed Royal Liver Building in Liverpool occupies a prime spot in the city on the banks of the River Mersey. Located at Pier Head, construction on the historic building began in 1907, with the official opening in 1911 and forms part of The Three Graces. Originally designed and built to provide offices for 6,000 employees of the Royal Liver Group, the site is now home to mixed-occupancy tenants. This includes office space, coffee shops and from 2019, a public exhibition which includes a 360 tour for both local and international visitors. As part of this redevelopment, Arup were chosen to create a new external dynamic architectural lighting scheme to illuminate the building. The brief included the need for the lighting scheme to be non-intrusive, ensuring the architectural features of the stunning structures were not compromised.
Led by senior lighting designer, Lauren Blow, Arup created a dynamic conceptual scheme which was then developed through a set of on-site lighting trials until the final design was signed off prior to order. The real estate consultancy practice CBRE, who are responsible for the Royal Liver Building, brought leading LED supplier LITE into the project to deliver this full turnkey solution of the scheme. This ensured the technological elements of the lighting design could all be fulfilled.

Having heard positive reviews of LITE from other clients, CBRE had complete faith in the LITE team to deliver all aspects of the project in time, and within budget. By fully understanding the brief and working closely with Arup, LITE were able to recommend a number of solutions from their market-leading portfolio, Arup in turn specified all the luminaires for the project. The luminaires of choice are from Lumenpulse, as these fulfilled all the project’s requirements. This includes the optic options, long lifetime, overall quality and the luminaire’s aesthetics. Ensuring the non-intrusive results, the Lumenpulse luminaires offer a sleek design, which ensures the lighting seamlessly blends into the building’s structure. The cabling for the luminaires, which is located across the 13 floors, were carefully hidden to keep with the city’s historic buildings ordinance. In total, upwards of 400 Lumenfacade RGBW DMX controlled luminaires were installed to illuminate key architectural features of the four facades of the building. Narrow beam luminaires were chosen to highlight the buildings cornice creating a dramatic effect. The fixtures are controlled by a Pharos LPC controller enabling the colour to be adjusted dependant on the occasion.

This approach ensures visual appeal from all four sides of the building, of which three are land-facing, while the fourth ‘Waterfront’ façade overlooks the River Mersey. The lighting design has also been carefully considered to ensure it is visually appealing, and comfortable, for pedestrians and traffic passing by the building. Elsewhere, AlphaLED solutions were used internally within the building. The installation was also completed by LITE, who were also appointed for this element of the project by CBRE. As part of this, LITE subcontracted a rope-access team to tackle the more challenging to reach elements of the installation. LITE were also responsible for project management and commissioning of the project before handover.

Lauren Blow, Senior Lighting Designer, Arup , said: “LITE have been fantastic throughout the process; from long days spent programming to late nights spent in all weathers doing mock-ups and commissioning. Their flexibility throughout this process allowed the project to be delivered to the highest standard, with all involved left incredibly impressed. Their enthusiasm about the project was infectious.

Andrew Milestone, Managing Director (Architectural) at LITE, added: “LITE is proud to have worked in partnership with Arup and Lumenpulse on the striking new external dynamic architectural lighting for such an iconic building. The Royal Liver Building is an important part of Liverpool’s history and heritage, so to be asked to join the team for this exciting project is a real honour. “Our range of carefully selected solutions from market-leading brands such as Lumenpulse mean LITE is perfectly placed to fulfil the needs of even the most demanding lighting designs. “LITE was able to specify products that we knew would fulfil the requirements for the Royal Liver Building, including the need for sleek, discreet fixtures.”

The project was completed within very impressive timescales. From design to completion, the whole project was completed in less than 8 months. Installation made up around 6 weeks of this, with commissioning in the final week before the grand unveiling and switch on.
As part of the new lighting scheme, the Royal Liver Building will now play host to a number of dynamic light shows. The fixtures are therefore controlled by a Pharos LPC controller enabling the colour to be adjusted dependant on the occasion. The dynamic capabilities of the luminaires were first showcased at Liverpool’s River of Light Festival. Arup’s five-minute light show, ‘Flight’ was shown every 30-minutes and accompanied by music. In recent weeks the façade has turned blue every Thursday in a show of support for the NHS. Light shows will remain a permanent part of the building’s façade and have been a welcome part of the Liverpool skyline. Arup also created a dedicated light show for Remembrance Day, which depicted a collection of scenes in a fitting tribute to fallen heroes. Other displays include support for those affected by the Australian wildfires, as well as Autumn and Christmas displays, among many others.

Lauren Blow concluded: “Every LITE team member had a drive to produce the best scheme on such a prominent and iconic building. We look forward to working with them in the future.”

As well as the prominence of the architecture itself, it is made even more iconic by the two large copper birds which sit atop the building. These two birds, named Bella and Bertie, are representations of the mythical Liver birds, the symbol of Liverpool. Designed by German-born sculptor Carl Bernard Bartels, the popular legend is that Bertie looks out over the city to protect its people, while Bella looks out to sea at the boats coming into port. 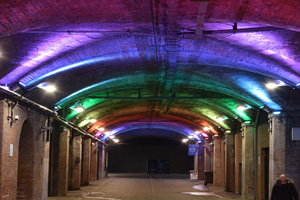 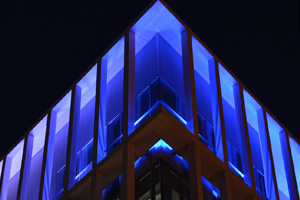 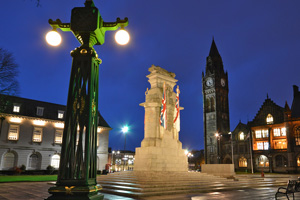 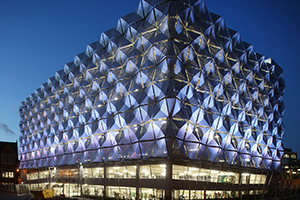